There’s an amusing exchange at the end of Terry Pratchett’s book Mort where Death shows up to a wedding reception (He’s not on business). Death is the one who speaks LIKE THIS:

…the Master of Ceremonies cleared his throat. His eyes took on a distant, glazed look. ‘The Stealer of Souls,’ he said in the faraway voice of one whose ears aren’t hearing what his mouth is saying, ‘Defeater of Empires, Swallower of Oceans, Thief of Years, The Ultimate Reality, Harvester of Mankind, the—’
ALL RIGHT, ALL RIGHT. I CAN SEE MYSELF IN.

Different cultures have always had different ways of speaking and thinking about death. To the ancient Jewish mind, people who died went to a joyless, dark, watery place, called Sheol, sometimes translated as “the grave.” Sheol was under the earth,

and associated with the primordial sea which existed at creation. Because of these associations, when people died or were destroyed, it was said that they were “swallowed.” When Pharaoh and his armies perished in the Red Sea, the Israelites sang that God caused the earth to swallow them (Exodus 15:12). In Numbers 16, the fate of rebellious Korah is to be swallowed by the earth (Numbers 16:30). The Psalmist uses this language again and again to talk about God’s wrath or the destructive acts of the wicked (Psalms 21:9, 35:25, 69:15, 124:3). Proverbs tells us that wicked men swallow up people like Sheol does (Proverbs 1:12). 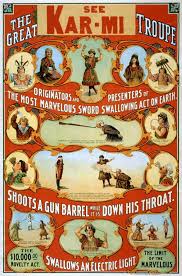 So death is the swallower, though not like the kind you see at Barnum and Bailey’s. It swallows the righteous and the wicked, men and women and nations.  It’s the problem that all mankind faces, dating back to the fall– “in the day that you eat of it, you shall surely die” (Genesis 2:17). But though this is such a problem in the Old Testament, the Old Testament itself intimates that this will not always be so.

One of the first hints we see that this state will not always continue is hidden in Samson’s riddle– “Out of the eater came something to eat. Out of the strong came something sweet” (Judges 14:14). The immediate answer to the riddle, of course, is that Samson found a beehive with honey in the carcass of a wild lion he had previously killed. But Samson’s riddle works on more than one level. The predator dies, and sweetness comes forth from him. Samson will someday bring freedom forth in his own death.

Later, in Isaiah 25:7-8, Isaiah meditates on the new thing that the Lord will bring forth, and on how he will bring it forth:

And he will swallow up on this mountain the covering that is cast over all peoples, the veil that is spread over all nations. He will swallow up death forever; and the Lord God will wipe away tears from all faces, and the reproach of his people he will take away from all the earth, for the Lord has spoken.

The grave is the swallower, yes, but someday the swallower will be swallowed by God himself! God will swallow up death forever. This is why Paul tells us in 2 Corinthians that while we live in this “tent” (our present bodies), we groan and are burdened. “Not that we would be unclothed,” he says, “but that we would be further clothed, so that what is mortal might be swallowed up by life” (2 Corinthians 5:4, emphasis mine).

Death is, today, an awful reality. We are subject to all of time’s depredations. We wither and mourn and die. But as we grieve, we grieve as those who have hope. Because Jesus died and rose again, swallowing the grave whole and delivering us from the slavery of death (Hebrews 2:14-15), we have the hope that someday, Death will be swallowed up by life.

“When the perishable puts on the imperishable, and the mortal puts on immortality, then shall come to pass the saying that is written: ‘Death is swallowed up in victory'” (1 Corinthians 15:54).