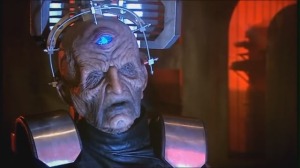 It seems like almost every episode of Doctor Who has the Doctor saving the whole of reality from some threat or another, but on at least two occasions the threat is deliberately leveled by enemies who are aware of what they’re doing. In “The Journey’s End” and “The End of Time, Part 2,” the Daleks and the Time Lords, respectively, try to put the kibosh on the whole thing. In both cases, it seems the Doctor’s enemies have gone insane.

Remember Stefonknee Wolschtt, the 52 year-old father of seven who decided he was actually a

six year-old girl? Remember Kaitlyn (née Bruce) Jenner, the still-technically-male Woman of the Year? Well here’s a new turn-up for the books. Richard Hernandez, a 55 year-old male-to-female trans who now goes by Eva Tiamat Baphomet Medusa, has decided that he (he prefers “it,” but I identify as an unaccommodating pronoun-user) is actually a dragon. He’s been undergoing procedures for a while to make that happen.

There’s some serious mental illness going on here. When sex, age, and even species are no longer defined as absolutes, then we’ve reached a rather critical point. I know that many members of the enlightened left don’t approve of the dragonization of America, but it seems they’d have to admit a double standard in order to maintain that disapproval. On what basis do we determine that a man cannot remove his ears, but that a woman can remove her breasts? At some point, something must mean something– if we can’t agree that a thing is a thing and therefore is not the opposite of the thing it is, then I’ve taken altogether too much care to put my fingers down on the keyboard, instead of just smashing keys and calling it a day.

The hope of the gospel is the hope for change, not into a woman or a six year-old or a dragon, but into a child of God, a friend of God, an heir of eternal life. “Beloved, we are God’s children now, and what we will be has not yet appeared; but we know that when he appears we shall be like him, because we shall see him as he is” (1 John 3:2). There’s our hope. A 41% suicide rate among transgendered people would seem to indicate that they need hope, and it doesn’t lie in a series of clothes purchases or operations. There are better options than chucking reality in the dustbin. 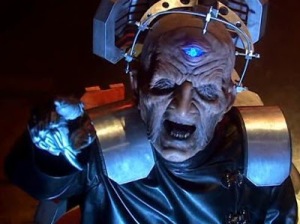 In an interview with The Sun, Tiamat said “Perfection is a magical thing to experience.” Davros thought that the reality bomb was perfection, too.