I wrote back in March about reading The Fabric of the Cosmos, by Brian Greene. Well, I’m still reading it, and it has me turned around as anything. 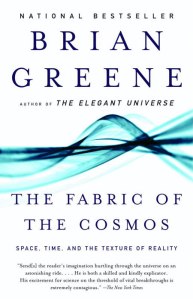 Right now I’m mired in the section on the flow of time and quantum, and I have to say, I’ve lost all faith in the scientific community. I just don’t know anymore. Let me see if I can enumerate my difficulty. By the way, if this is all too much for you but you want to know what I’m getting at, skip to the paragraph which begins with “Did you get that?”

In Chapter 7, “Time and the Quantum,” Greene talks about an experiment designed (I think) to determine whether light acts as a particle or a wave. A light source is set up in front of a mirror which allows light to pass through or to bounce off at a ninety-degree angle. Through some clever use of mirrors, the two waves of light are then directed toward the same detector film.

Now, according to wave interference, the detector should look like the picture on the right, with bands of bright and dark. Interestingly, when the emitter is turned down so that it only emits one photon at a time, which means that it must either pass through the mirror or be reflected off of it, the interference pattern builds up in the same way- this, I believe, is what they call a probability wave. How that even happens I have no clue, since Greene later says that probability waves don’t exactly exist, not in the same way in which we think about things existing.

It gets worse when time comes in. See, the probability thing means that when a photon is emitted, it could go down either pathway from the splitter, which means that, until observed, it goes down both of them. Now, a detector can be set up which monitors one of the pathways, so we can know which one the photon actually went down. When that happens, we get a band more like the one below on the left. It seems that the act of observing the photon forces it down one path or another. When the detector is switched on, we get the image on below on the left; when off, we get the image above to the right.

Here’s where it get tricky (just kidding- we’ve passed through tricky and out the other side about three paragraphs ago): The detector can be programmed to switch on or off at random after the particle has passed through the splitter, and in that case, it appears that the photon has already ‘decided’ whether to be uncertain (right pattern) or certain (left pattern). The particle, at the splitter, cannot ‘know’ whether the detector is on or not; in fact, the detector hasn’t even decided whether or not to be on or off at that point. Nevertheless, in such a case the photon has already ‘decided’ to act in accordance with what we would expect, whether the detector is on or off. Greene says that “It’s as if the photons adjust their behavior in the past according to the future choice of whether the new detector is switched on; it’s as though the photons have a ‘premonition’ of the experimental situation they will encounter farther downstream, and act accordingly. It’s as if a consistent and definite history becomes manifest only after the future to which it leads has been fully settled” (The Fabric of the Cosmos, pp 188-89).

Did you get that? To sum up, in a random experiment wherein events can be manipulated to produce one of two results, the initial event (the photon’s ‘choice’ to go down one pathway or another) is uncertain until the second event (the detector’s random ‘decision’ to turn on or off) happens. In other words, the past is contingent upon the future, at least as far as quantum is concerned.

Even though Greene is a good enough writer to explain that experiment and its conclusions in such a way that I think I understand it, I still don’t believe it. How can I? The past isn’t contingent upon the future- that violates my concept of both past and future!

If this didn’t blow your mind, either I have explained myself poorly or you have no imagination. That’s all there is to it.

One thought on “No Way”